US, British, Canadian, and other Navys: Norway, Poland, Greece & Netherlands

5-Adolf Hitler is taking control of all invasion responses

is now the Beaten Fox

4-“Reverend William T Manning broadcast of prayer for d-day” and all mankind. Episcopal Bishop of the Diocese of NY

6-Eleanor Roosevelt –message for women of the US with soldiers – Pray! Exclusive Blue Network Broadcast

2-Correspondent flew above the invasion and reported-I have that tape! WJZ-NY

4-Ray Henley – report from Pentagon. Interesting note, Pentagon was empty at the time of invasion, even those working on the plans didn’t know when it would happen TOP SECRET??

8-Kept trying to “Take you now to London” FAIL

Quality              1-Broadcast announcement that you’re about to hear the famous George Hicks – European Bureau Chief of the Blue Network standing on the deck of warship and watched the invasion 10 miles away. “as he spoke he talked into a United States Navy film recorder (Recordograph machine) .” It was the first battle broadcast of the invasion. Historical recording of one of the greatest events in human history.

2-Report about German defenses on road to Paris. “Atlantic Wall”.

5-General news about war in the Pacific, etc etc

2-Complete detailed D-Day Airborne paratroopers description from take off to drops in France.

8-Walter Kiernan-Editorial filler on pre-war and war. Ramsey – Commander in Chief of Navy for Invasion

Description of flight and commentary to bomb run

Back to James weather with bomber re-cap

***   3-Report from ship at anchor before leaving-

Just passed a mine! On ship description 25 miles from English coast – 75 miles to France

2-All iconic speeches by important people (leaders) of WWII

*Famous words from 6 years of war narrated by Paul Killian

2-Some French traitors – snipers as they invade-

3-Commentary on future during and after the surrender

8-Commentary about citizens was effort and hard work up ahead to rebuild, etc. etc. assist Europe to rebuild

**     a) Ed Pierson – London and Moscow details on surrender

b) Victory thanks – but don’t forget cost in lives, etc

Proclamation on whole of war – synopsis – cleanse the world of evil

Lights are all coming on again – but bring darkness to the Japs!

Walter Kiernan in NY – bulletins from beginning of Invasion

Instructions for playing Amertape Recordings: Click on number, then click on play button. Repeat for each recording 1 through 7. 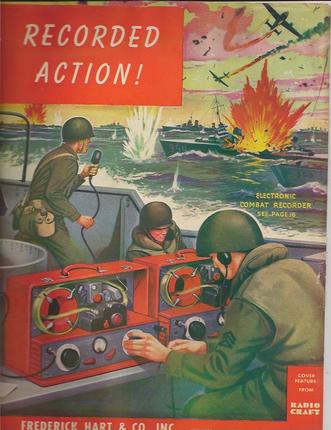 TABLE OF CONTENTS OF THE 16 D-DAY AMERTAPES.